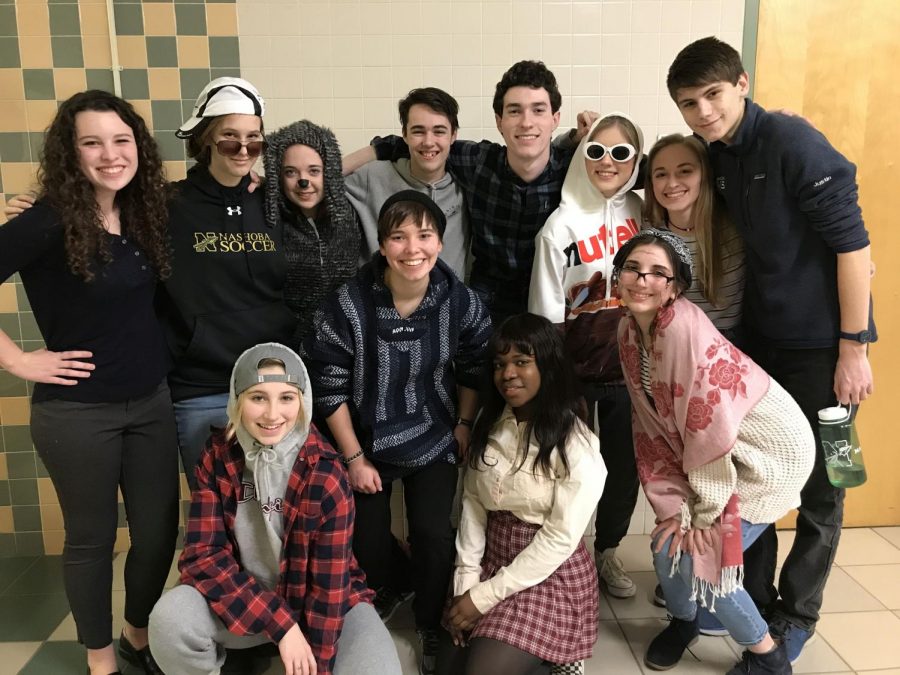 Juniors posing for a group photo before the big night

On Friday, February 7, people crowded the auditorium to watch each grade put on a student-run play. It was a night full of fun, laughter, and broken vases. After the plays were over, judges and audience members voted for their favorite play and actors.

The freshman play was called 21 Guaranteed Ways to Get Detention by Ian McWethy, and directed by Avery Cullen. The play starred Ryan Irvin, Theona Tully, Maddie Webb, Jessica Piotte, and Olivia Yang. Cullen said that she chose the play because of her small cast, and because she “really love[d] the comedic back and forth between characters.” She also mentioned that the play went “better than [she] could have ever hoped.” When asked why she wanted to direct the play, Cullen said that she “wasn’t originally going to do it, but [she] knew that if [she] wasn’t going to be in it, then [she] was going to direct.” We’re all glad that she did!

The sophomores put on Check, Please! by Jonathan Rand, directed by Ava Klein and co-directed by Niamh Guyer. Alex Masucci, Kailey Samarjian, Nina Ambrose, Veronica Wells, Sonia Nicholson, Emily DiMeo, Audrey Recko, Larissa McMahon, Eliza Wachtel, Halle Farmer, Marina Schiering, Jessica Beck, and Becca Solomon all gave amazing performances onstage, while Daniella Masucci and Niamh Guyer helped out backstage. Alex Masucci said that the show “went really well. It was really fun to do and we all bonded over it.” Masucci went on to say that the scene where the grandma dies was her favorite, and that she thought “it definitely got the most laughs.” The director, Ava Klein, said that “the show was definitely harder to put on than [she] thought.” Klein said that there were some issues early on, but “everything came together in the end for a great performance.”

The junior play was An Absolutely True Story (As Told by a Bunch of Lying Liars), also by Ian McWethy. Justin LeBlanc directed this hit, and cast Emma Conant, Jonas Weijer, Carly Henderson, Jack Boyle, Thora McIsaac, Sophia Farinella, Abby Crowell, Nylah Erickson, Miranda Clack, Samantha Felt, and Judah Nutting as his award-winning actors. LeBlanc said that he felt that “the show went extremely well. [He is] very proud of all the actors who put in so much work to perform such a funny and memorable show.” LeBlanc called out Carly Henderson, one of his actors, for “finding the show and suggesting it to [him]. After reading it [he] knew that the show was for [them].”

The seniors put on High School Judge and Jury, by John Leverett. Luke Piotte directed while Emma Young, Nolan Stocker, Katie Coen, Ameilia Read, Alicia Milioto, Anastasia Fournier-Wassink, Luke Piotte, and Trinity Cortes starred in the production. Piotte said that he “chose this play because [he] thought that it would be a comedic play.” He said that he faced many challenges, including being “short-handed, so some extra people that have never acted before decided to take a shot at auditions.” He continued, saying that he was “very pleased with how class plays went.” A few last minute changes led to a great performance!

The juniors won the battle, followed by sophomores, then seniors, and the freshmen took fourth place. Olivia Liang (freshman) won Best Debut for her roles as Felix, Milton, Bonnie, Eve, Hank, and Damien. Emma Conant (senior) and Jonas Weijer (senior) won Outstanding Actor. Hallie Farmer (sophomore), Veronica Wells (sophomore), and Nolan Stocker (senior) won an award for Most Committed to Character. Justin LeBlanc won Best Director, to which he said that he felt “so honored to be chosen. All of the shows were so well done and put together.” Well done to everyone involved in the productions!

Special thanks to Nashoba’s Drama Society and ITS Troupe, and stage manager Katie Coen for putting on the plays, as well as the judges for coming out. If you are interested in getting involved with Class Plays next year, get in touch with Ms. Foley in September.